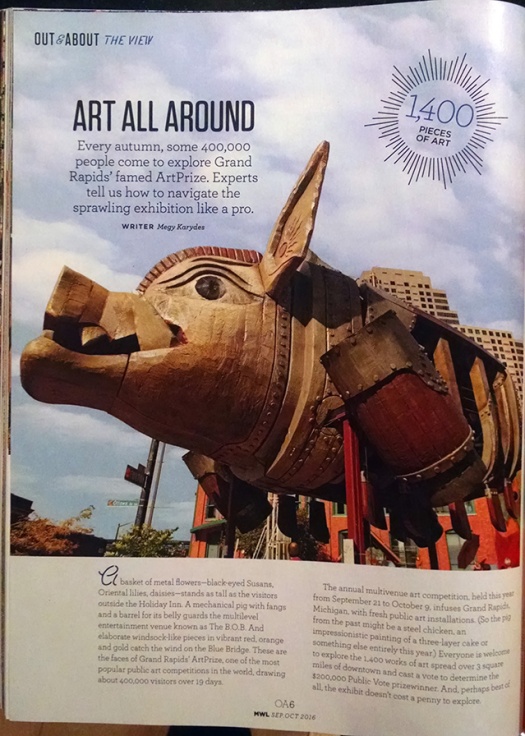 the pig still has wind… article from Sept/Oct issue 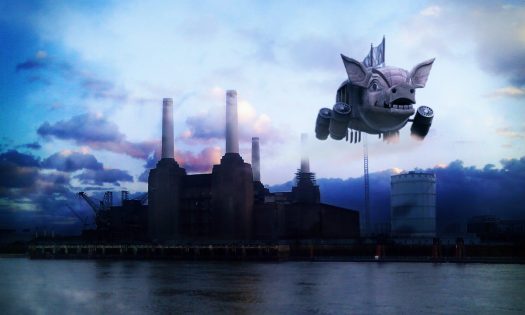 In Crush at the B.O.B.  Unfinished Paintings, Progression of Movement: Acrylics on canvas, Black & White Contact sheet, Colored Pencils on board. 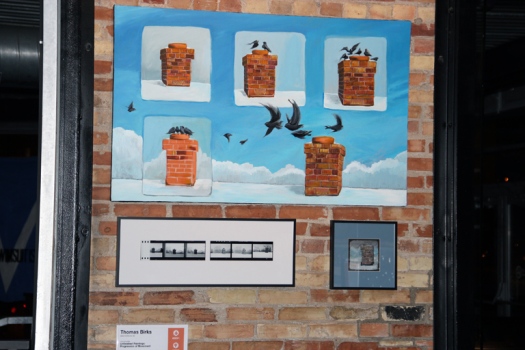 I wanted to show some other facets of my background in art and design. I have a BFA in Illustration from Kendall and have been working as an animator or motion graphics designer, as it is called in the industry these days, for almost 25 years. The piece I’ve installed for Artprize shows a storyboard or a sequence of events that tell a short story of how pigeons, during the winter, will congregate on open chimneys for warmth… and will take to the wind in groups if/when startled. The black & white contact sheets represents the reference for the painting and the pencil study was a quick drawing to show the brick texture and color. I’ve called the painting “unfinished” because there are parts of the study that remain partially rendered… there is a certain fluidity in the representation of the bird studies that I wanted to retain in the overall immediacy of the brush work… without overworking the piece. Which is why I like to work with wet media such as acrylics and watercolors.

below:photo of me, my mum & da

Parsifal is for sale… I am drawing out a technical illustration to show how the steampig breaks down into components. +90 components and sub components make up the structure. It took almost 4 days to move and install the pig. She weighs more than 25,000 pounds and is approximately 55′ long X 25′ high X 25′ wide. all comments welcome.

Road trip news, rants, and ruminations by the Editors of RoadsideAmerica.com

Like its predecessor, however, Steam Pig was popular with the public, so it’s being allowed to stand through the winter in the hope that a bankrolled benefactor will give the pig a permanent home. No one wants to see this tusked behemoth shipped off to the styrofoam sculpture slaughter house.

According to its creators, Steam Pig was built from the long-lost plans of a forgotten engineering genius of the late 19th century. Like all madmen, he was motivated to prove his critics wrong, specifically those critics who laughed that his ideas would only be accepted “when pigs fly.” In Steam Pig’s case, flight came from its mysterious mechanical internal gearing, and a set of four tilting turbines in place of its trotters.

The alternate universe of Steampunk has inspired other works of public art; we can only hope the landscape will become even more Forevertronic.

First, however, Steam Pig will have to find a community that can appreciate a 47-foot-tall swine. Cincinnati? Or some hog-wild place in Arkansas?

and the story of Dr. Hammond VanOchre’s Plans for the Flying Steampig to be presented at the 1893 Chicago’s World Fair 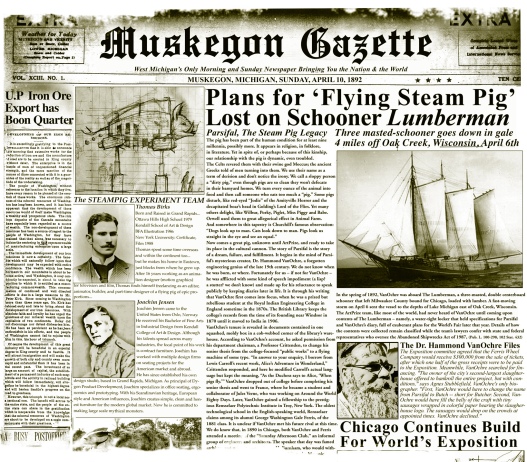 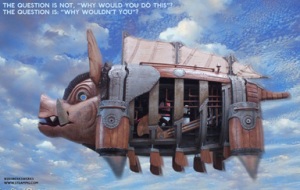 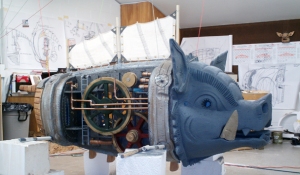 Joachim and Mary were able to find a warehouse for the full scale build. It’s a beautiful space downtown complete with nice big garage doors and a huge paint booth. Now we have a place to work out of and also a place to show off the model to prospective sponsors. The time is critical. We need a pretty good sum of cash to get started and finish this piece in time. Spread the Word.

BerksWerks
Create a free website or blog at WordPress.com.